This year we worked on two separate projects. Cody, my 2015 apprentice, trained as a Foreman and ran his own project, building a round wood timber framed, bale cob art studio.  Cody did a great job, with the help of this years apprentices.  The other project was a timber framed, earth bag structure.  Our first one of this nature. It was hard work, but a lot of fun. 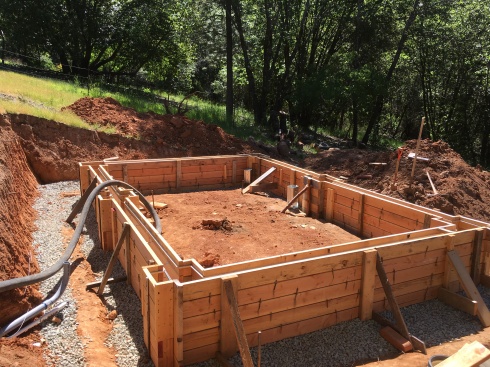 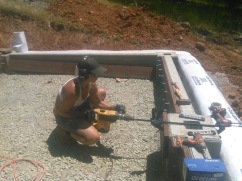 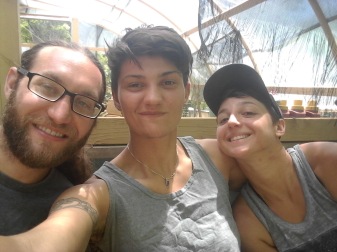 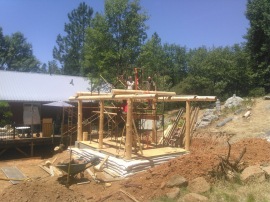 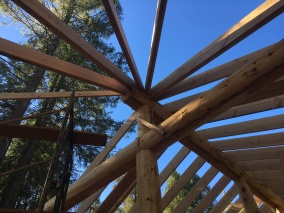 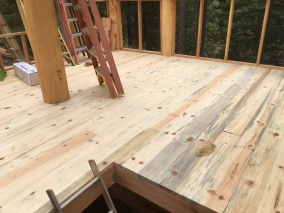 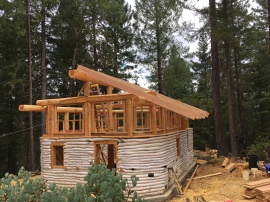 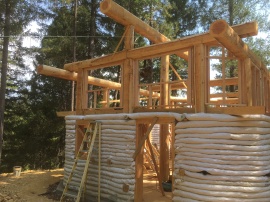 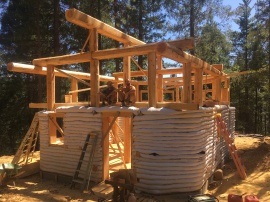 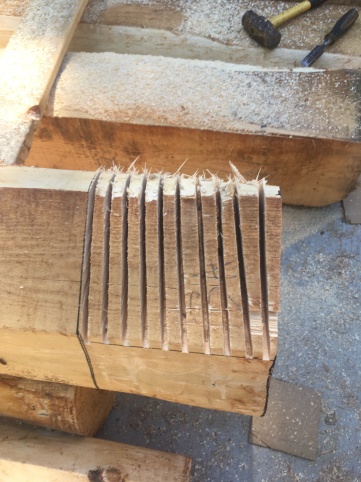 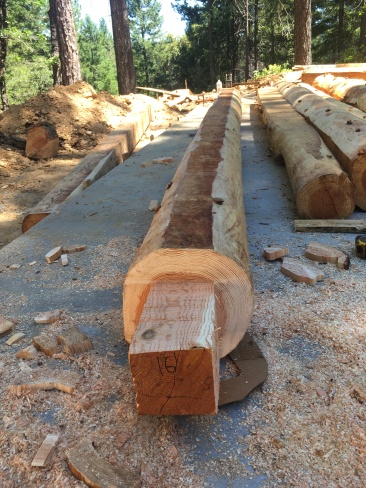 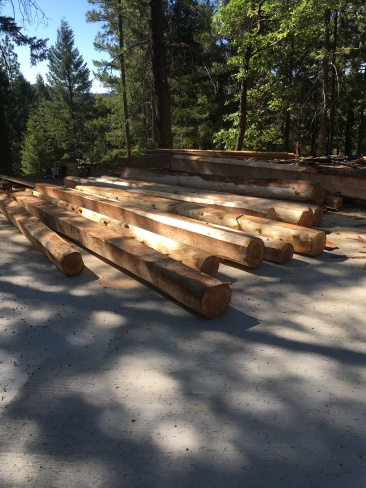 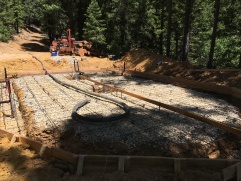 We had a wonderful year.  It was extremely hard and it took a lot of effort but we where able to build up the straw bale walls for the Manning project, plaster the exterior walls, install the windows and doors, and finished the rough plumbing and sub floor. 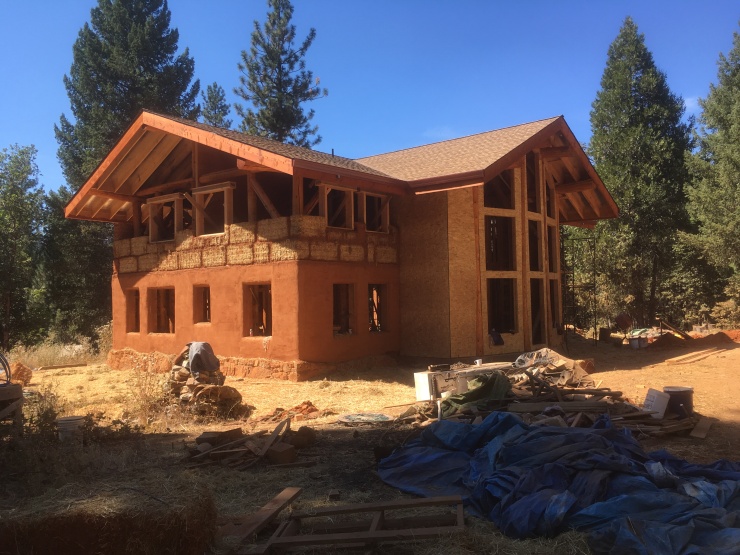 We also started the construction of our family home.  Its been a long time coming, but we finally found the land to build it. 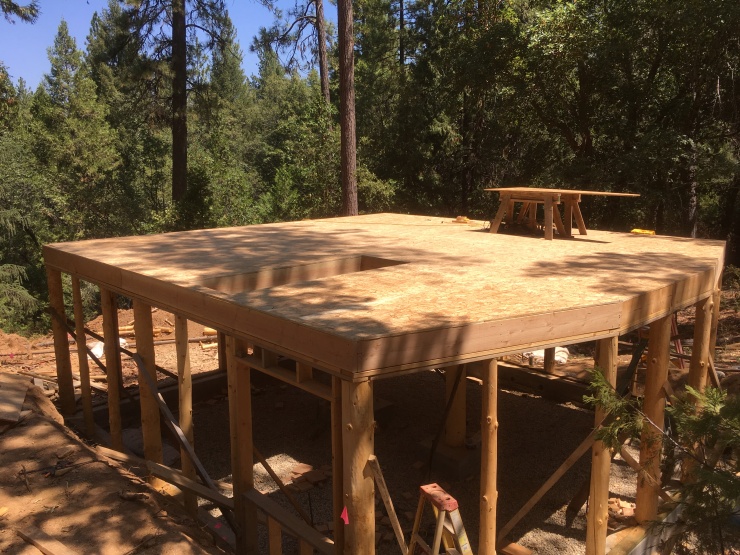 We had the honor to start on the construction of a single family dwelling for a beautiful family in our community.  This structure is the largest building we have ever attempted so far.  It’s over 2,600 square feet, with 5 bedrooms, 2 1/2 baths, and with a full 2nd story.  The timbers are massive and it was a lot of work to get this building to the roof.  Unfortunately the rains came early and the roof was not quite done.  But in the end, everything was completed, and the roof was on just in time for the major winter rain and snow storms.

We had a wonderful group of apprentices, karma yogi’s, volunteers, and teachers.  It was such an amazing experience for all of us.  I just want to personally thank everyone that helped make this project a reality.  Your presence and love filled us and this beautiful building with divine grace.  Thank you all….

This year we had the great privilege to work for and with some amazing souls.  We started off by finishing last years greenhouse.  We roofed it, built some windows and doors,  plastered the inside and outside, and laid stone around the base of the building.  It turned out beautifully, we even had help from the homeowner, her beautiful dolphin was just the finishing touch the wall needed.   Thanks to all that helped make this project possible.

We also built a beautiful natural structure for Yogoata Dairy.   It’s now called an Ash-ram, it has cinder ash on the ground, for the goats, chickens, and Donkey to roll on, so the mites don’t bother them.   The structure was built using four building techniques, round wood timber framing, stick framing, lath and plaster, and light clay filling the cavities.

We also had the honor to build for a close neighbor who needed a bale cob pump house.  She will use it as a cold storage, and make use of the cold water that comes from her well.

Overall 2014 was a great success.  We made some great friends, fostered old friendships, and continued to live a natural healthy life, doing what we love.  Thank you to all the participants that made this a memorable year.  Many Blessings to you all.

This year was jam packed with many projects of all shapes and sizes. We started the year by finishing the Bale-Cob Classroom, which is now named The Temple of Joy.

Then we started work on the Goat Shack…. 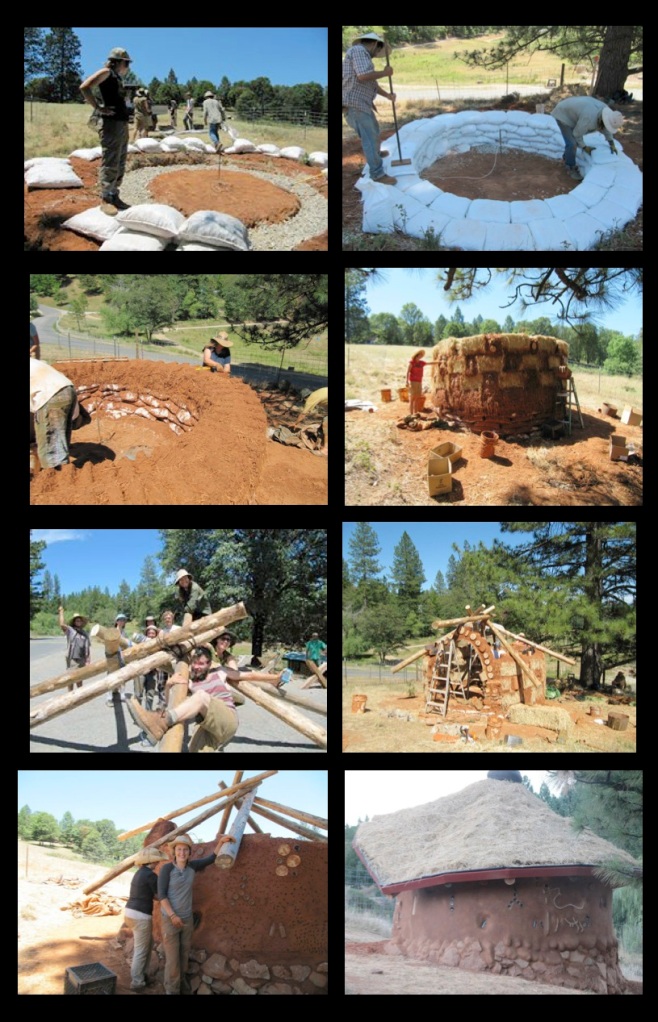 During all these projects, we kept working on the Wright Family Art Studio…. 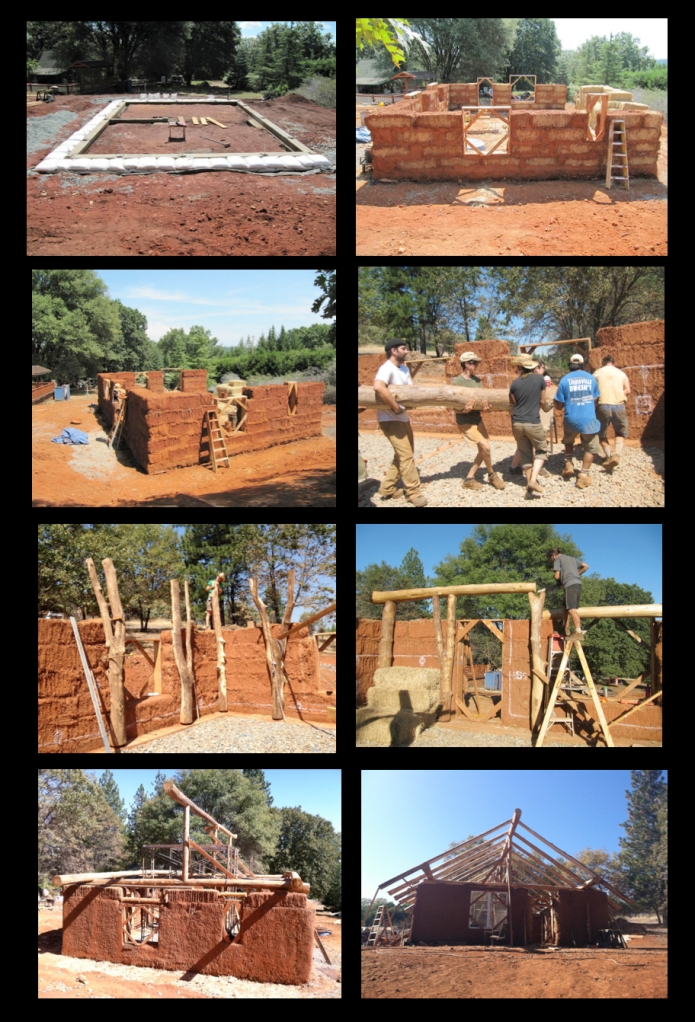 And then we built a bale cob greenhouse.  It was a fun filled year, thank you all for making 2013 a wonderful year.

We constructed a 200 square feet bale-cob shop.  This shop gave us the opportunity to practice round wood joinery  and fine tune the unforeseeable problems before we construct the larger structure mentioned above.  This project allowed the apprentices to see the construction of the building up to the installation of the roof.  In reality this was a perfect size building for a first time builder.  It is alway recommended to start small, and add on as time and money allow.

One Reply to “Projects”